The most expensive cars all over the globe are not less than any inventions. They are quicker and more powerful than ever before. Also, they come wrapped in achingly gorgeous styling that makes them rolling works of art. From reviving premium motors to the stupefying things possible with today’s technically efficient infotainment systems, we have got you covered with the most multi-million dollar cars to date.

Thinking about what this year’s most expensive car, Bugatti is? We’ve unveiled the same for you in this article. With our updated list of the most expensive cars 2021 ranking, you are surely going to enjoy reading about several four-wheeled wonders. Today we tend to talk about this outstanding and expensive museum-grade artwork like it’s a completely normal thing.

Production is extremely limited in this circle is only within the reach of the wealthiest tycoons, royals, and oligarchs. Entire runs of most of the models can be spoken for almost immediately upon their unveiling.

Many of these expensive production cars come from uber-exotic brands with names that are not familiar to most motorists. Other cars are the ultimate expressions of motoring from more familiar names like Aston Martin, Ferrari, and Bugatti.

We are featuring the 10 costliest rides for 2021 in this article. We are focusing here on production models that are specifically fabricated for one of the world’s richest enthusiasts.

What is the most expensive car in the world? Read on to learn about the10 costliest, and luxurious, cream-of-the-crop cars on the market.

Top 10 million-dollar cars at a glance:

For the most expensive car around the globe, we turn to history. After all, if you’re investing in a gorgeous yet costliest supercar, it should be one that can give you a feel that’s up to the mark.

In 1964, marking the ninth year in a row, the 250 GTO won the Tour de France Automobile. Only 36 of these cars were produced between the years 1962 and 1963. The specific Ferrari that’s the most expensive car in the world of all time, at an unbelievable price point, $70,000,000 was victorious not only in the Tour de France but also got placed in the Le Mans.

Due to its top speed of 174 miles per hour and acceleration of 0-100kph (0-60mph) in 6.1 seconds, some termed it the Picasso of the Motoring World while others termed it e Holy Grail of Ferraris. Late in the ‘60s, it was the fastest car in the world – and, now, decades later, it remains at the top of the most expensive cars in the world of all time by a long shot. 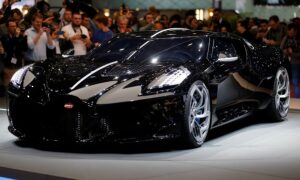 Bugatti made a brilliant branding decision in the year 2019 during the rolling out of their latest supercar. Instead of a bold introduction and title name geared to sensation, the French manufacturer opted for an instantly iconic, minimalistic car title: La Voiture Noire. The Black Car.

Although, going into details of this iconic model doesn’t interrupt the awe of this extremely powerful and luxurious car with a sky-high price. It’s got a quad-turbo W16 8.10L engine that produces 1500 horsepower, a carbon-fiber shell that’s sculpted by hand, and an acceleration of 0-100kph (0-60mph) in 2.4 seconds.

The top speed of this model is 420 kph (260 mph), and its overall performance is precision-engineered by an auto house that’s famous for producing the most expensive car brands in the world for decades on end.

In 2019, it was the most expensive car in the world available for purchase. Two years have elapsed, and no one has yet released an expensive luxury car to date, geared to knock La Voiture Noire off. It has also won over the price for the most expensive modern car for the second year in a row.

The Zonda was the first-ever rarest car in the world out of the Pagani Automobili, auto house. Years ago, favoring the Huayra, production should have ceased. But instead, Pagani has come out with many varied special editions of the Zonda.

The Zonda HP Barchetta was thus named, Barchetta because, to Horatio Pagani, that’s what it actually resembled: a “little boat”. Moving on to the specifications, the frame of Barchetta is entirely blue-tinted, formed of carbon fiber for an ultralight body and speedy feel. It has a minimized windshield, and it stands 21 inches tall (0.5 meters).

Unfortunately, the Pagani Zonda HP Barchetta is also the most expensive car that one can’t buy. What’s more interesting is, only three vehicles were ever made of this distinctive, specific version of the Zonda. When the last got sold, one of these vehicles went for a price of $17.6M. Talking of its acceleration, it ranges up to 0-100kph (0-60mph) in 3.4 seconds. The Zonda HP Barchetta can reach a top speed of 355kph (220 mph).

Read more: Top 10 Most Popular Hollywood Actors in the World 2021

Bugatti, already a brand known for unique bodywork and luxurious comfort features, has sought to give the Centodieci, the most expensive car everything possible to make it memorable – and completely decadent. And what’s even more exclusive of Bugatti’s 2021 Centodieci is that only ten of these luxurious hypercars will be sold. (Each car has found a happy buyer already, despite the sky-high price.)

With a 1577-hp quad-turbo W-16 engine, it may not be the fastest Bugatti currently on the road, but it is definitely the coolest car in the world with the quickest acceleration.

With this car edition, Bugatti pays tribute to the EB110, a supercar that was produced early in the ‘90s. EB110 didn’t perform to the mark as it was hoped.

This car, Bugatti Centodieci will make up for that, bringing high-grade performance and luxury to spare. Bugatti has posted a claimed acceleration of 0-62mph (or just over 0-100kph) of 2.4 seconds. Bugatti’s Centodieci will have a top speed of 236 mph,  distinctly less than the Chiron, but this super exclusive car makes up for it with its distinct modern aesthetic. 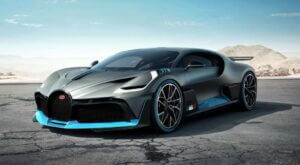 Bugatti’s reputation continues with the next two luxurious and expensive cars, starting with the 2021 Divo, the most expensive car in the world 2021. Bugatti’s Chiron was such a huge success that the Divo, a supercar that closely follows it, has several indistinguishable features. However, the Divo is a more exotic-looking & exclusive supercar with its top speed, 380km/hr (0-62mph).

Divo being an extraordinary supercar includes a much lighter frame for increased speed better suspension, and a new dorsal fin. As a result of being the most expensive car, the Divo houses an 8.0L W-16 engine with four extremely powerful turbochargers & even has an acceleration of just over 0-100kph (0-62mph) in 2.4 seconds including  1500 horsepower as well.

Bugatti kept the comfort materials and infotainment to the least inside the car to save as much weight as possible. However, the steering wheel features soft faux suede, and the blue and black aesthetic outside of the car is featured inside as well.

Bugatti’s Chiron Super Sport 300+, the historic supercar provides an unmatchable speed and power alongside the charmer that truly makes a Bugatti a Bugatti. Under the hood of each car lies decades of maestro craftsmanship and years of automotive artistry.

Bugattis often go for several million and it surely wants you to know that, feel that, every time you see one. Wearing sinuous curves on its sleek facade are futuristic. It consists of a mind-bending 1,577 horsepower engine from a quad-turbocharged 8L W-16 motor.

Years ago, this was the first-ever vehicle to break the then-golden speed barrier of 483kph (300mph) and so, much like the most expensive car in the world, this Bugatti has a claim that will never allow its value to depreciate.

The Bugatti Chiron Super Sport 300+ having a basic infotainment system that syncs with both Apple and Android products accelerates from 0-100kph (0-60mph) in 2.4 seconds. It reaches a top speed of over 300mph. 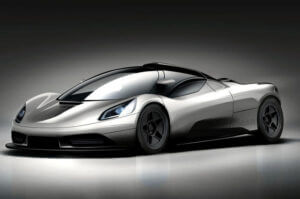 Gordon Murray, the engineer of the McLaren F1, has been an out-of-the-way automaker for about fifty years. In his honor, Gordon Murray Automotive is building across 100 road cars and 25 track-only vehicles.

Billed by countless as “the last great analog supercar”, the T.50 is the best car in the world building. According to Murray, The Gordon T.50 serves as an intended capstone. Murray has also described the upcoming T.50 as “a bookend to the story of ultrafast internal-combustion cars.” Indeed, many automotive houses are focusing on hybrids, electric models, and other sustainable initiatives but Murray is acknowledging the same by going out for one final hurrah, T.50.

Moving on to its classy specifications, it has a six-speed manual gearbox, a small yet powerful, and naturally-aspirated V-12 engine, and a traditional three-seat layout.

The Gordon Murray T.50 being the most expensive car has a top speed of 220mph (354 kph) whereas official acceleration numbers have not yet been released.

Ever wondered, what is the most expensive car in the world? It is Lamborghini Sian FKP 37, named in honor of the late Ferdinand Piëch. Lamborghini knocked into the lucrative world of limited series models with its program, Veneno. And the time when it became a big success, a huge number of custom commissions were welcomed to finance developments to help keep the V12 engine alive.

Limited to 63 units in coupé form, Lamborghini is the fastest car to date. It runs with on a supercapacitor technology with 48-volt system, instead of batteries, which is an advanced performance solution we won’t ever see in the Aventador’s eminent successor. Even in 2013, three customers paid $4,000,000 for their Venenos in advance.

Undoubtedly, the Sián FKP 37 is less exclusive than the trio, but it’s understandable that the Sant’Agata factory has no issues charging price-points like Bugatti. Especially now that it’s being run by the same CEO, it is the most expensive car to date. 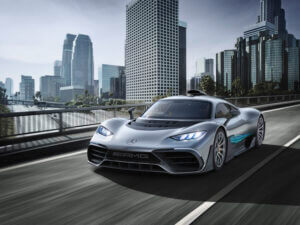 As it unfolds, modifying a 1.6-liter V6 hybrid powertrain from Lewis Hamilton’s 2016 W07 Hybrid F1 car for roadway use, while contributing to a factory warranty is troublesome, to say the least.

Holding up to 2021, the AMG Project One, reportedly has been renamed as AMG One, the most expensive car featuring an engine of 1,000-horsepower aided by a wild active aero system undoubtedly fine-tuned by the seven-time F1 world champion himself. 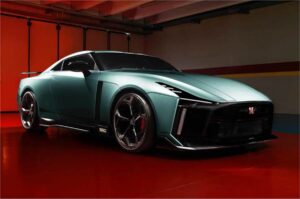 The firm founded by Giorgetto Giugiaro has upgraded the 2021 Nissan GT-R Nismo, owned by the VW Group via Lamborghini, Italdesign. The upgraded version has come up with bigger turbos that generate 720 horsepower. Tweaking the chassis, it added a custom hand-built body just in time to celebrate the GT-R’s 50th anniversary.

Limited to 50 units, the Nissan GT-R50 is the most expensive car. The Nissan GT-R50 was fine-tuned at Italy’s Tazio Nuvolari circuit which is now ready for deliveries in early 2021. The production of the R35 Nissan GT-R took place in December 2007, with the GT-R Nismo following in 2013. It was the fastest ever production volume car around the Nürburgring.

Given the Nissan GT-R50 is truly hand-built in nature, it also comes in all historic GT-R color themes. Customers willing to spend millions on a Nissan probably won’t try to break records with this exceptional piece of kit.